Eugenia honours its war memorial and the people who built it 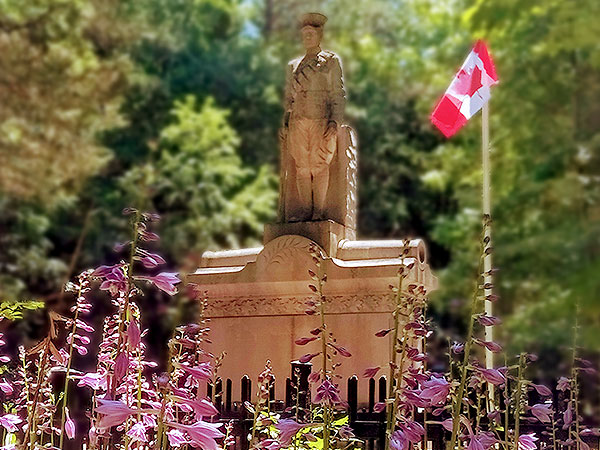 BY JOHN BUTLER FOR SOUTHGREY.CA — A one-hundred-year-old remembrance was brought back to life in Eugenia on July 21. Fourteen people, under the auspices of the Grey Highlands Peace Committee, gathered at Eugenia’s war memorial, in the presence of local hosts Stewart Halliday of the Peace Committee and Ron Barnett, Chairperson of the Eugenia District Community Improvement Association, to mark the hundredth anniversary of the unveiling of this monument. Attendance at the event was limited because of COVID restrictions, but a larger event will likely be held later in the year, sponsored by the Canadian Legion.

Committee Chair Lynn Silverton read aloud the names of the eleven local soldiers who fell in the First World War and whose names are inscribed on the war memorial, located in a forested area once known as Hydro Park adjacent to Eugenia Falls. Silverton then pointed out the unique architectural details of the war memorial, commonly referred to as a cenotaph, and included an account of repairs that had been made to the war memorial over the years. She recited the Act of Remembrance, customarily part of Remembrance Day services in Canada, and called for two minutes of silence. The names of the First World War’s fallen are: David Armstrong, Robert Bell, Fred Fisher, J. Howard, Robert Leppard, Earl Parliament, Earl’s brother Stanley Parliament, Charles Roy, Emerson Smith, Emerson’s brother Fred Smith, and Wes Wilson.

Ron Barnett then pointed out that the name of one of Eugenia's fallen servicemen is not inscribed on the monument — Flight Commander George Gordon MacLennan, whose name may have been omitted because he moved to Owen Sound at the age of 14. MacLennan’s Great War experiences are outlined in a July 16 South Grey News story, Eugenia Cenotaph turns 100 – remembering our departed local heroes and one almost forgotten, excerpts from an article written by United Church minister David Shearman. 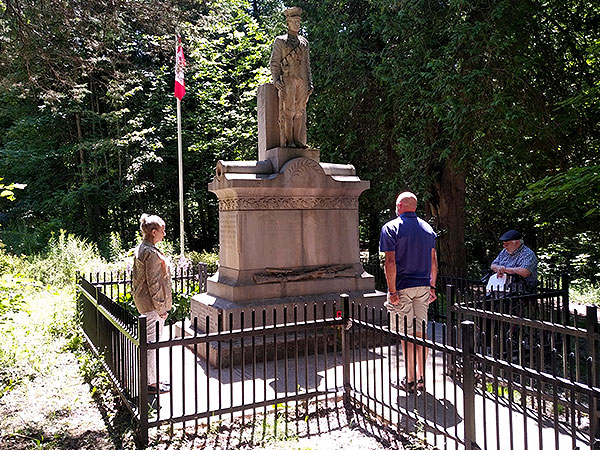 MP Alex Ruff stands at attention after laying a wreath at the cenotaph.

Two floral tributes were placed at the base of the memorial — a vase of flowers presented by Ron Barnett on behalf of the people of Eugenia, and a cross-shaped wreath placed by Bruce Grey Owen Sound Member of Parliament Alex Ruff, on behalf of the Peace Committee. In his remarks after laying the wreath, Ruff mentioned the resonance of this event for him as a veteran of the Canadian Armed Forces (Ruff’s career as an officer spanned decades and included service in Afghanistan). He also pointed to the universality of the memorial’s message across generations and communities, expressing the hope that his young daughter, who accompanied him at the commemoration, would long remember what she saw and heard on this day.

Peace Committee member John Butler read a detailed news article from the July 28, 1921 edition of the Flesherton Advance, written by editor W. H. Thurston, that described the full-day’s events on July 21, 1921, including the unveiling of the memorial and related commemorative events — speeches, a baseball game and an evening concert. This news item is online in the Flesherton Advance Archives. Composing this news article was likely especially meaningful for editor Thurston, whose son Arnold, an artillery officer, had been killed in action in 1916. The article paid tribute to the role that Eugenia’s women played in the creation of the war memorial. “The monument is not only a memorial for the departed heroes, but a monument as well to the great love of a grateful people and the labours of a faithful mother and sisterhood. The funds for this beautiful piece of art have been raised by the efforts of womanhood alone, and to them be all the honour.”

Research by Peace Committee member Elizabeth Norrington showed that two Eugenia women who had lost sons in the Great War — Mrs. Adam Smith and Mrs. William Wilson — transcended their own grief to take lead roles, along with other members of Eugenia’s Women’s Institute, in a fundraising campaign, starting in July 1919, to build the monument. Norrington presented MP Alex Ruff with a copy of Eugenia: A historic Treasure, a publication of the Eugenia District Community Improvement Association (EDCIA) and available online on the EDCIA website, as a memento of his participation in the commemoration.

Peace Committee member Colleen Boer ended the commemoration with a prayer that paid tribute to the men whose names gave dignity and purpose to the war memorial, and to the women of Eugenia and district who supported their soldier sons, grieved for them when they fell, and created a monument to their memories.