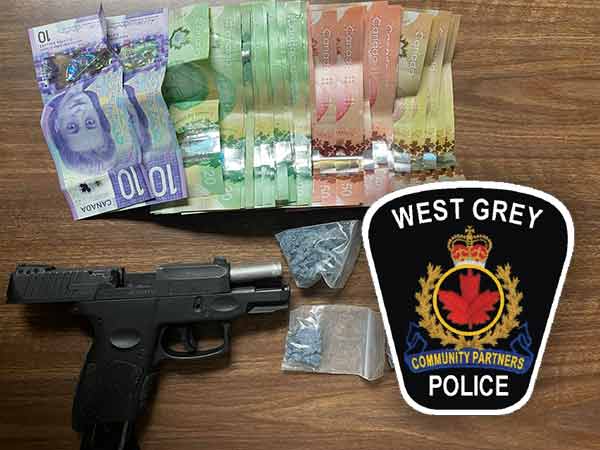 During the week of January 6 - 13, 2022, the West Grey Police Service responded to 74 total calls for service.

On Monday January 10, 2022 West Grey Police were called to an address in the Town of Durham after learning of a Bail Violation in progress. Officers located the suspect and charged him.
A 30-year old male from Woodstock was arrested and is charged with:
· Fail to Comply with Release Order (X4)
· Breach of Probation (X2)

The suspect was held in custody for a Bail Hearing, but was later released by the Ontario Court of Justice on further conditions and a monetary surety.

January 11, 2022 – Drugs, Weapon, Stolen Vehicle – On Tuesday January 11, 2022 West Grey Police were called to a reported suspicious vehicle just south of the Town of Durham. Investigation revealed the vehicle was stolen. Two males were taken into custody. Officers then recovered a 9mm pistol, a large quantity of Fentanyl and cash.
A 29-year old male from Owen Sound and a 40-year old male from Toronto are charged with;
· Possession of Schedule 1 substance (Fentanyl) for the Purpose of Trafficking
· Possession of Prohibited Weapon
· Careless storage of firearm
· Possession of Weapon Dangerous
· Possession of Stolen Property Over $ 5,000
· Unlawful transportation of a firearm

COVID 19 Update
Significant changes to the Ontario COVID situation. Learn more about what this means for you.