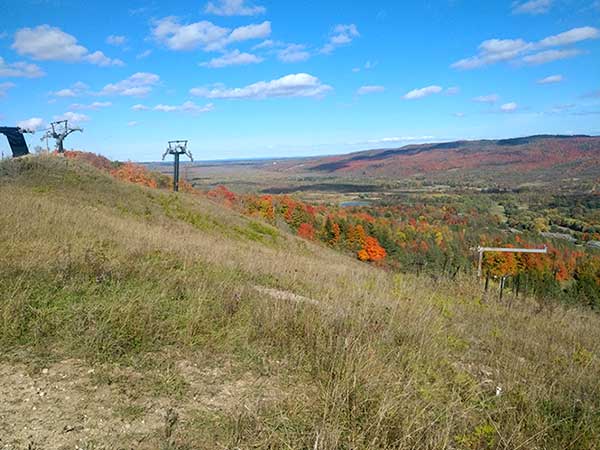 BY SOUTHGREY.CA STAFF — Concerned citizens gathered at Kimberley Hall on Dec 29, 2022 to hear representatives from organizations opposed to development of the former Talisman lands. Escarpment organizations are opposing the development plan by Beaver Valley Development Group (BVDG). BVDG purchased two parcels in 2022 from the Municipality of Grey Highlands. The parcels consist of upper and lower lands on either side of Talisman Mountain Springs Inn, currently owned by Brian Ellis. This development does not include the former resort property.

On December 6, the BVDG held the second in a series of public information sessions at Kimberley Hall. During the meetings held on that day, the group revealed many options for the two parcels in question. Among the development options proposed, were residential and commercial uses, some parkland, trails and open space. Although still in the very earliest of planning stages, BVDG’s Head of Planning and Development Paul Mondell indicated that approximately 70 per cent of the upper parcel can be developed and 25 per cent of the lower lands are being considered for development.

In their session, BVDG revealed that 250 low-rise housing units with many single family homes or more are being considered for the top parcel, including a wellness centre and trail head parking. Among the ideas discussed for the bottom parcel are another 250 maximum three-story condo units, as well as a mixture of other housing, golf course and boardwalk trail along the river.

The December 29 citizens' forum was held in response to the BVDG proposals. Moderator Paul Woolner, introduced each speaker.

Alex Speigel - Partner at Windmill Development Group is a senior urban development professional and architect with over forty years of experience in design, development and management. Growth should be of value, enduring, and sustainable. There are many layers of planning.

He made the following points:

Since the early 1970s, the Ontario government has had a program to protect the Niagara Escarpment from inappropriate land use and development.

The Niagara Escarpment Plan was adopted in 1985.

In the past, the Beaver Valley has come under threat of development:

"People said they would not win, but they did win", explained Leverty. "There is a lot of pressure to build in the Beaver Valley."

"The valley is our health spa. We don't need a wellness spa. Lands should go back to the public. This is the beginning of a fight to save the Beaver Valley." said Leverty.

Kate Lazier is a member of Protecting Talisman Lands which was created in Oct 2021.

"The Niagara Escarpment Plan is (designed) to maintain a natural corridor. Grey County's Official Plan was to create 620 housing units by 2046 into settlement areas. This proposal is too much density in the wrong place", said Lazier.

There was flooding of the Beaver River recently. Flooding and water are major concerns. These lands are on Karst, which is porous rock. Water flows through it and gives way, resulting in sink holes.

There is a risk to the water supply. Such large developments set a precedent for other projects to follow.

Planning/Politics are complex issues. This project would require an amendment to Grey County's official plan.

The Protect Talisman group has hired a planner to let them know how to deal with this and they plan to do their own studies and build a coalition of groups concerned with the proposed development. The planning process could take two years.

Bruce Harpinson is the President of the Escarpment Corridor Alliance https://myescarpment.ca. Their goal is to create a protected land permanently. He explained the following:

Castle Glen is another proposed development in the Beaver Valley (but not a BVDG project). The property is 620 acres with 1600 planned homes to be built on the brow of escarpment. "Something can be done (about this)," said Harpinson.

Mary Ferguson, member of Friends of the Beaver Valley, spoke briefly to say that a number of organizations are working together.

Martha Rogers of the Kimberley Safety Group (Roads) spoke of concerns regarding speed and volume of traffic, lack of infrastructure and no spaces for parking or sidewalks. She is a proponent of Vision Zero, a strategy to eliminate all traffic fatalities and severe injuries. "Road safety is one of our freedoms and rights," she stated.

Erica Ferguson brought forth her concerns about health and hospital capacity. With increased housing units and a higher population, how will the hospital cope as it is now struggling. The new hospital has fewer beds than the current hospital.

Each organization is looking for donations and volunteers to help fight the development. Visit each website to donate and contact them to volunteer.