Letter to the editor: Street naming in Grey Highlands 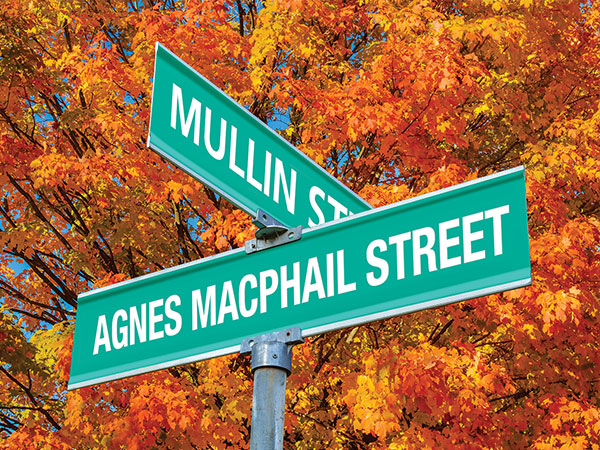 LETTER TO THE EDITOR — It is my understanding that the Municipality of Grey Highlands is considering naming Street A in Markdale’s Stonebrook Phase 3 draft plan of subdivision “Mullin Street,” presumably to recognize former Grey Highlands Mayor Brian Mullin.

I suggest that Grey Highlands consider an alternate name for this street. In making this suggestion, I mean no disrespect to Mr. Mullin, nor do I cast aspersion on his exemplary service to our municipality.

We have many heroes in our past. How about beginning to honour them in new street names? And how about recognizing the under-appreciated roles of women by giving priority to recognizing women from our past?

Most obviously given that this year is the hundredth anniversary of the election of Agnes Macphail as the first woman to sit in Canada’s House of Commons, would it not be appropriate to name it “Agnes Macphail Street”? Or if not Agnes Macphail, how about other illustrious local women? How about Cora Hind, distinguished journalist and champion of women’s rights? How about medical missionary Dr. Anna Henry? How about Carrie Davis, defender of vulnerable Asian immigrant women and children? How about naming a street after one of many local women who lost a son in war but who continued to serve the community despite their grief? And even if Street A ends up being named “Mullin Street,” how about making a municipal commitment to naming future streets after illustrious women from our past?

Through the symbolism of street naming, our municipal elected officials have the opportunity to reach beyond themselves to recognize civic heroism that transcends the realm of municipal officials.

I respectfully hope that Grey Highlands council avails itself of this opportunity.