Eugenia residents advocate for safer roads in their community 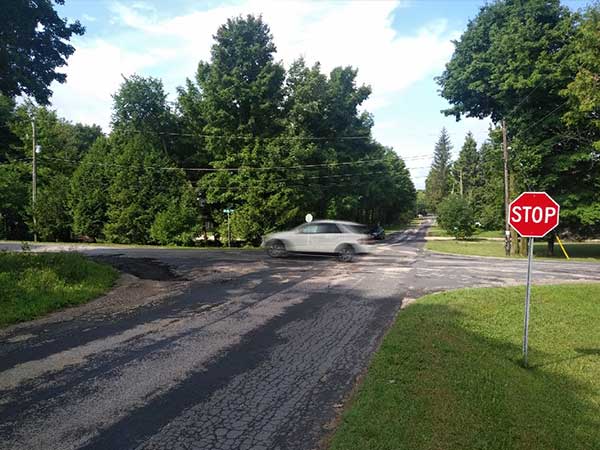 BY SOUTHGREY.CA STAFF — Since a tragic road accident near the intersection of Inkerman and Canrobert claimed the life of one person and sent three others to hospital with serious injuries, residents of Eugenia have attempted to mobilize for the cause of pedestrian safety.

Prior to a Grey Highlands Council meeting on Wednesday, August 3, Councillors heard from a number of constituents who advocated for safer streets in their community. At the meeting, more concerns were heard. "Pedestrians are 284 times more likely to be killed or injured in a motor vehicle accident than drivers or their passengers," claimed Eugenia resident Ron Barnett who spoke in the Open Forum.

Citing a municipal study of the Inkerman/Canrobert intersection completed in 2018, Barnett said, "We don’t need another study that doesn’t take pedestrian safety into consideration. We need action." According to him, the study which was conducted as a result of resident complaints, neglected to include any concern for pedestrians and whether space is available for them on sidewalks or roadside shoulders."

On July 26, the Grey Highlands Police Services Board (PSB) had recommended that Council direct staff to investigate the options of making an intersection on Inkerman St. into a 4 way stop, and consider lowering the speed limit to 40km/hr within the village. The recommendations came before Council via the submission of minutes on August 3.

While discussing the PSB meeting minutes, Councillor Dane Nielsen made a motion to adopt each of the PSB traffic safety recommendations. But CAO Karen Govan cautioned Council, sharing advice received from Grey Highlands lawyers who advised against any reaction by Council to the accident on Inkerman, citing pending lawsuits and the liability of taking any action after-the-fact.

The motion was defeated in a recorded vote. Deputy Mayor Aakash Desai and Councillors Cathy Little and Danielle Valiquette were opposed to putting these pedestrian safety measures in place.

Another item on the same agenda concerned a 2018 Road Management Plan Report and Presentation by Henry Centen, R.J., Burnside & Associates Limited originally presented at the Grey Highlands Committee of the Whole (COW) meeting held on July 27. The plan contained recommendations for road needs management. Within the report, Burnside claimed that more than 50% of Grey Highlands roads were in need of repair, but also recommended that over 730 m of poorly-maintained sidewalks be removed without replacement.

Among the sidewalks slated for removal, was a neglected and overgrown pathway that runs along Pellisier St. in Eugenia, a paved road where residents have also reported concerns over pedestrian safety. 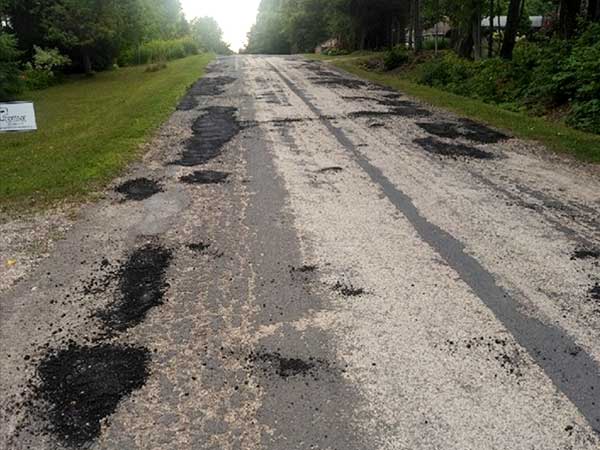 Canrobert St. in Eugenia, the road that leads to the beach and boat launch, shows bad need of repavement. The hill makes it impossible to see approaching cars on the other side and the lack of shoulders and sidewalks further compromises pedestrian safety along this well-used arterial road.

The Burnside report also threw up red flags for Barnett, who addressed opposition to the removal of poorly-maintained sidewalks. "By removing sidewalks, you make our communities less safe for pedestrians," said Barnett. "Pedestrian safety is largely about separating cars from people." Barnett advocated for the restoration of these neglected sidewalks. "According to the Canadian Council of Motor Transport Administrators (CCMTA), the presence of a sidewalk reduces pedestrian collisions by 88 percent over no sidewalk."

While Council received the report, none of the recommendations within the report were adopted in the August 3 meeting. Instead, Council authorized staff to consult with R.J. Burnside and Associates Ltd. to develop a scope with costing to do a 2023 Report Update to be presented in the 2023 budget, when decisions will be made with regards to road and sidewalk repair.

Another motion by Nielsen instructing staff to bring back costing for a Pedestrian Safety Study for all of Grey Highlands gained a better reception from Deputy Mayor Desai and Councillors Little and Valiquette. This motion was passed unanimously.

In a 2013 Pedestrian Report completed by the CCMTA, many effective ways to minimize pedestrian vulnerability on our roads were outlined. In that document, the CCMTA explains that Canada lags behind many top performing countries in the Organization for Economic Cooperation and Development (OECD) when it comes to pedestrian safety. "No longer is it acceptable to assume pedestrian injury is inevitable when motor vehicles share the road system with vulnerable road users. In the modern era of road safety, jurisdictions can assume a safe system approach and include pedestrians and other vulnerable road users as an essential component of the system and one that is given top priority."

Eugenia residents hope that this sentiment will resonate with the greater Grey Highlands community and be something positive to come out of the recent tragedy in their village.