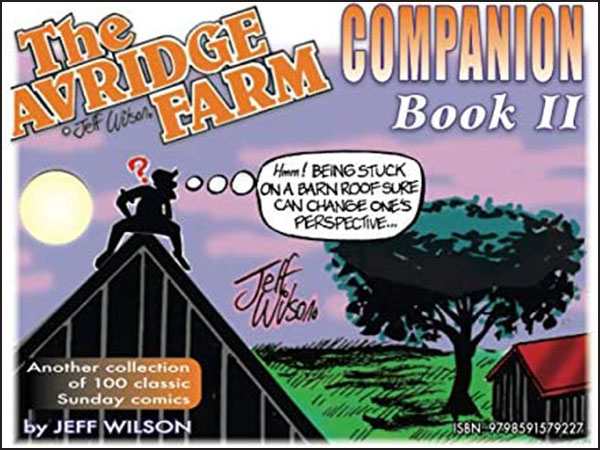 BY JOHN BUTLER FOR SOUTHGREY.CA — One of the most interesting farm families in South Grey County doesn’t exist, except in the brain and through the drawing tools of local cartoonist Jeff Wilson. The Avridge Family, created by Wilson, found their first home in the pages of twelve Ontario newspapers, many of them in Wilson’s compendium of strips, The Avridge Farm Companion.

The Avridges are back in book form again this year in The Avridge Farm Companion: Book II, a collection of 100 strips that reintroduces us to the cast of characters – human and animal – who live in mythical Rockenstone Township.

The family comprises husband Irv (not the world’s best farmer or fixer-upper), his astute city-born wife Mike who works off-farm, daughter Amy and son Jimmy, and Irv’s mother Mary, who gardens and writes a column for the local paper. Rounding out the cast – their neighbor Herm (Irv’s more experienced soul-mate in farm woe), Dale the dump manager, and my favorite character, the inane unnamed clerk who is the public face of Modern Feeds and Farm Supplies, a relentlessly grinning young fellow who can best be described as a surrealistic entrepreneur. Wilson himself describes the feed store as “a co-op store on caffeine.”

And the animals. A megalomaniacal groundhog makes a guest appearance (“We rule the underworld”), but the Avridge Farm’s cows are the co-stars. Despite living with “happy cow disease”, these bovines act as a cynical Greek chorus commenting from time to time on the foibles of the humans they own while running their own affairs through their Cow-ncil. Cows and people share a healthy rural cynicism about their world. As neighbor Herm puts it, “This country is so backward that if it fell on its tail-bone it would smack its face.” 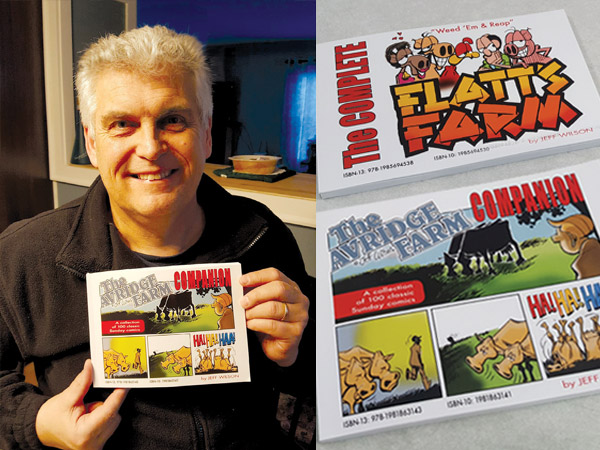 The Avridge Farm’s creator, Jeff Wilson, comes by his rural sensibilities honestly, having grown up on the edge of the hamlet of Lauriston near Markdale (he and his wife are Priceville residents). Wilson can’t remember a time when he didn’t want to be a cartoonist. As early as seven years of age he created “farm funnies” drawn on discarded survey forms – a talent recognized early by his mother, who still possesses a fragment of living room plaster wall from the old farmhouse on which her son did one of his earliest drawings (a smiling face with teeth that look more like the front grille of a ’56 Chevy).

While in high school in Flesherton, Wilson toyed with the idea of a career in broadcasting, but the school’s principal Murray Juffs steered him toward the graphic arts, saying “I saw your eyes light up when you talked about cartooning.” A later influence on his professional life was Lynn Johnston, creator of the strip For Better Or For Worse, who encouraged his interest in creating an animal-strewn egalitarian alternate universe.

Wilson graduated from the Cartooning and Graphic Story Arts Program at Oakville’s Sheridan College in 1979, and has cartooned professionally ever since, most recently drawing pandemic-themed “blog-toons” for the Dundalk Herald and Flesherton-Markdale Advance, and providing a monthly cartoon for the magazine Hello Country. He has also taught cartooning in libraries, and in elementary and high schools of the former school boards of Grey and Bruce counties (now amalgamated into Bluewater District School Board). Having recently taken up teaching his craft again, Wilson conducts online and in-person digital illustration classes through the facilities of the Blue Mountains Creators Space. These are available to the general public and many sessions are now viewable on YouTube.

If you need a break from mundane pandemic reality, make a visit to Avridge Farm. Let yourself be irritated by the feed store clerk, informed by the farm wisdom of neighbor Herm, and made welcome at Irv and Mike’s kitchen table. You can order a copy of The Avridge Farm Companion: Book II from its author Jeff Wilson for $15.20 on Amazon or Saturday mornings at the Flesherton Farmers Market local authors’ table. 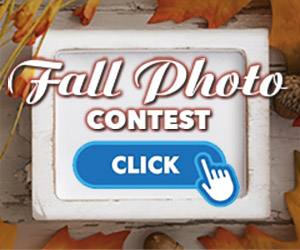