Local advocates to rally in Owen Sound, on (rescheduled) January 31 to protest development of the Ontario Greenbelt 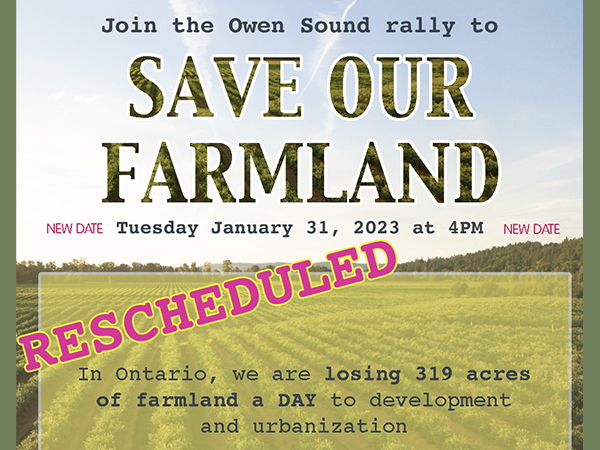 Ontario Greens leader and MPP for Guelph, Mike Schreiner, will join local environmental advocates to save the farmland and wetlands from development opened up by Bill 23 and its related policies. The protest will take place this Tuesday, January 31 in Owen Sound.

“Ford refuses to listen to the experts, and instead is bulldozing over Ontario’s decreasing farmland and wetlands allowing a handful of land speculators to profit at the rest of Ontario’s expense,” says organizer Danielle Valiquette. “

Advocates are rallying against Bill 23 and its associated policies, which will sell off conservation lands without oversight, strip conservation authorities of their powers, and remove protections from woodlands, wetlands and wildlife habitat.

“Bill 23 will devastate farmland, all while doing almost nothing to build more affordable homes as it is positioned,” says Valiquette. “Ford’s own housing affordability task force has made it clear that we can build the homes we need within existing urban boundaries, and not on the farmland and wetlands that perform vital environmental and agricultural functions–like feed us!”