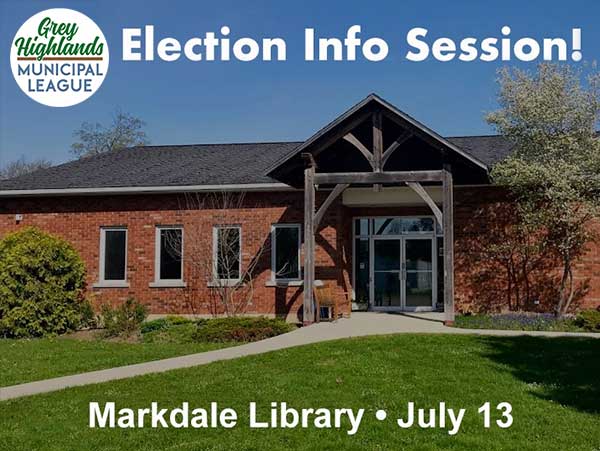 BY SOUTHGREY.CA STAFF — On October 24, a new slate of Councillors will be chosen to represent the residents of each municipality in Ontario. But in Grey Highlands, a small group of ambitious local residents and organizations are hoping to make this fall election something special. The group, called the Grey Highlands Municipal League, is committed to boosting civic engagement and increasing voter participation to more than 50%.

Although the election may seem far away, the nomination period ends mid August and as of this story publication date, only three candidates have signed up to run for Grey Highlands Council. The League wants to increase that number before the deadline to enter. It also has designs on increasing voter turnout.

In 2018, voter turnout in the Grey Highlands municipal election was 36% — even smaller than the provincial average of 38.29%. "We’re non-partisan, fact-based and fun!" boasts the League's website (https://www.votegrey.ca/) dedicated to designing a non-partisan voter-awareness campaign to boost community participation.

The principal organizer behind the effort is Eugenia resident Dave Meslin, activist, creative director of Unlock Democracy Canada and author of Teardown: Rebuilding Democracy from the Ground Up — the book which has spawned a future documentary series on TVO. "The series will diagnose the state of our political system with the aim of finding the remedies that will save our democracy from apathy and indifference," said Meslin. The voter-awareness campaign developed by the League aspires to do the same.

Based on the results of the most-recent provincial election this June, Meslin and his league have their work cut out for them. "Getting a really engaged and insightful electorate is a problem," explained Robert Williams, political science professor emeritus from the University of Waterloo in a 2018 CBC report. Williams cited an absence of highly localized media to thoroughly discuss the issues but was hopeful that a "booster campaign to remind people about municipal elections" would be helpful.

Low youth engagement was another factor for poor turnout in the last municipal election. Among the reasons for their under-participation, a Statistics Canada survey taken following the 2018 municipal election, showed a specific lack of interest taken by Ontario residents aged 44-years and under.

As an answer to that problem, many people argue that if the voting process was easier, more people — especially disinterested youth — will participate. Toward that end, Grey Highlands Council recently directed staff to bring forward a bylaw authorizing alternative voting methods for the 2022 election, which could include a combination of electronic, phone, mail and in-person methods. A survey conducted at that time indicated that 78% of respondents preferred an electronic voting system, while 15% preferred paper ballots, 6% preferred vote-by-mail and only 1% preferred casting votes via telephone.

A resultant Grey Highlands bylaw was passed on November 3, 2021, authorizing the use of optical scanning vote tabulators for the purpose of counting votes for municipal elections as well as the use of Internet voting as an alternative voting method that doesn’t require electors to attend at a specific location in order to cast their vote. Only time will tell if this effort will help boost voter turnout this October.

To further efforts of boosting engagement, the League will host their first public event on July 13. It will be an info session about the forthcoming municipal election held at the Markdale Public Library, 75 Walker St. in Markdale. All are welcome. "It's an opportunity for ordinary citizens to learn about this year's municipal contest, volunteer to help make a real difference or become a candidate," said Dave Meslin.

Presentations by Grey Highlands Municipal Clerk Raylene Martell, Organizer Dave Meslin and others will answer any questions attendees might have about the role of Council, job descriptions, financial remuneration and much more. The group can even help prepare prospective candidates for their campaign and manage their expectations in the lead-up to October 24.

A Mayor, Deputy Mayor, five Councillors and four School Trustees will be elected to serve the municipality for the next four years. South Grey News is committed to supporting the League in their efforts and reporting on the candidates vying for your votes in Grey Highlands as well as in each of southern Grey County municipalities.

Get interested! Get involved! And consider putting your own name on the ballot!