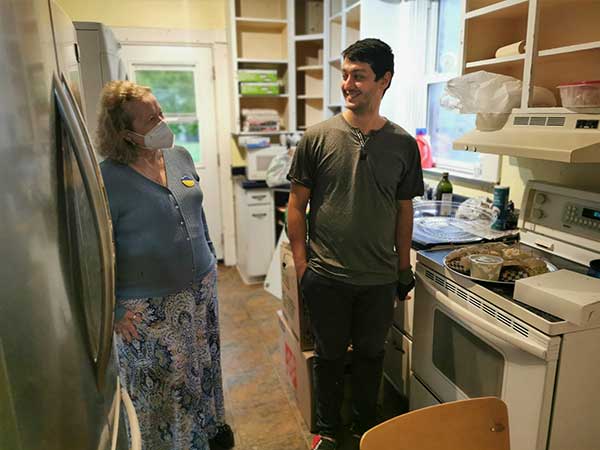 Ukrainian newcomer Siavash M. and Grey County Cares Chairperson Lynn Silverton during renovations to the Rural Net House in Owen Sound, before his family moves in.

BY JOHN BUTLER FOR SOUTHGREY.CA — If you need to find a house for a Ukrainian newcomer family, then go out and buy one.

This decision by Heiner Philipp and his activist wife Susanne von Toerne shows the kind of 'just do it' outlook that makes them indispensable members of the team in Grey Highlands who help Ukrainian families to escape the perils of their homeland and to settle in or near Grey Highlands.

Heiner owns and is President of Rural Net, an internet service provider headquartered in Flesherton. From the beginning of the invasion of Ukraine, Heiner has donated a portion of his firm’s monthly income to help Ukrainian families seeking refuge in Canada. Susanne, a German-trained surgeon with a history of hands-on voluntary medical assistance to vulnerable populations overseas, carries her 'get it done' approach to her work helping the same people Heiner cares about. Susanne has made two trips from a base in Germany to a Polish camp for fleeing Ukrainian families, on each trip bringing families to initial safety in a quiet German town. But this was only the beginning for her. Once back in Canada, she worked tirelessly to help Ukrainian families to legally enter Canada and helped them to settle here — not an easy task since the families usually fled Ukraine with nothing more than a suitcase or two, and little or no money.

Fortunately, Susanne discovered and joined a group of kindred spirits in Grey Highlands — people committed to helping Ukrainian newcomers, but with the longer term goal of helping any families who have been compelled to flee from their homelands — women-led families from Afghanistan for instance. The core of these helpers formed a group called Grey County Cares (GCC), organized largely by playwright and Markdale bookstore operator Kevin Arthur Land. Grey County Cares has concentrated on raising money and soliciting and distributing supplies to newcomer families in partnership with the Markdale Rotary Club — a relationship made easier through the commitment of then-Club President Lynn Silverton. Through the sale of Grey County Cares lapel pins and several fundraising events, Grey County Cares has raised thousands of dollars to cover flight costs of three Ukrainian families (comprising 20 people) from Europe to Canada, initial rental cost for families as they move into rented independent lodgings, dental bills, bicycle helmets for children, SIM cards, drivers' license costs, discretionary spending money and a host of other expenses. As well, GCC has sought and distributed vast amounts of donated clothing, housewares and other necessities as families find their feet in Canada.

Housing has been essential, says Susanne. In addition to the accommodation provided by host families when newcomers first arrive, follow-up accommodation is needed for families moving to the next step — their own rented homes, close to where family members can access jobs and education. While Grey Highlands can provide some of these resources, many families need to move to larger nearby centres — Owen Sound and Collingwood – to find work and the educational resources they need.

The M. family have moved into the house (to protect their privacy, we are not using their full name). The family comprises wife Angela, husband Siavash, son Raian and son Liam (a three month old baby born after the family arrived in Canada). Siavash moved into the house first, to take a lead in carrying out renovations with the help of volunteer work gangs and tradespeople who donated their expertise. Angela and their boys lived temporarily in Mississauga during the renovation phase and the family, reunited, all now live in their Owen Sound home. Heiner and Susanne hope to help Siavash to requalify as a dentist/dental surgeon here in Canada – something that may take several years. Heiner hopes a GoFundMe campaign will help cover the steep cost necessary for Siavash to become part of Ontario’s oral health workforce. Angela, Siavash and their boys were able to become the house’s first Ukrainian tenants because of the success story of another family, the N.'s (again, not their full name). The eight members of the N. family were slated to move into the house, but Yuryi N., a Greek Ukrainian Catholic priest, was able to secure a job assisting the priest in charge of a church in Brampton.

Angela M., an accountant by profession, lives with an anxiety common among Ukrainian newcomers — she worries about an elderly relative left behind. Angela’s grandmother has refused to leave her home in Cherkasy, saying she survived World War II in that town and she will not let Russians force her out. Other Ukrainian families live with constant fear because their sons and fathers are fighting on the Ukrainian front lines, or because their relatives are exposed to the terror shelling of residential areas by Russian forces.

Susanne and Heiner are quick to point out that they are part of a larger network of helpers, and they are eager to publicly thank as many of these helpers as possible, even at the risk of leaving out the names of some of the many caring people in our communities. As examples of these hero-helpers, they mention:

Susanne points out that these people and organizations are only the tip of the iceberg that comprises what she calls our compassionate community. She also says that not one donor or volunteer has asked for public recognition in return for their contribution.

According to Susanne, much need has been met but more need will emerge as incessant bombing and the onset of a Ukrainian winter without adequate fuel drive more families with children to seek a haven here.