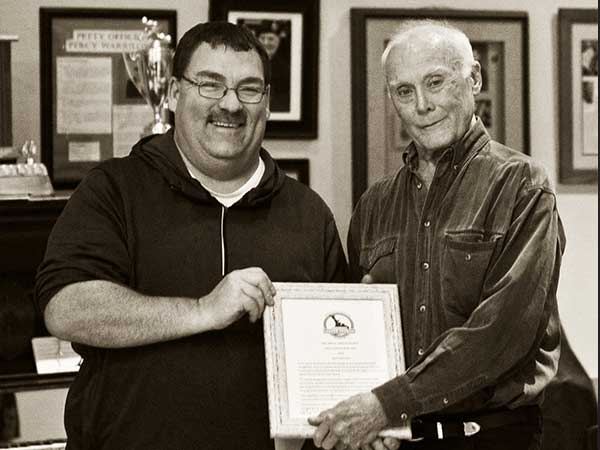 President Kevin Smith of the GBLC presents the award to David McLaren.

On Monday October 24, the Grey Bruce Labour Council awarded David McLaren its annual Activist of the Year Award, “for a career devoted to the well being of your community and in recognition of your ceaseless drive … The award recognizes contributions made to and on behalf of the community, workers and vulnerable members of society.”

David moved up here in 1990. He has spent the last 32 years working on social and economic justice issues as an individual and also with the Saugeen Ojibway Nations, then through the local riding association of the NDP. He ran for federal office in the election of 2015.

Over the 32 years, he has called Grey Bruce home David has been an activist and advocate for those who fall through the cracks.. Recently, he brought attention to the numbers of homeless people in Owen Sound and elsewhere in Grey and Bruce.

Homelessness is increasingly an epidemic in our area. “The solution some municipalities, including Owen Sound, have for our homeless neighbours is to roust them from their encampments and safe places. This, I think, is cruel, especially with winter coming in. There are better ways to help, but it doesn’t seem to me that Councils are looking very hard at them. They are certainly not implementing them.” Clearly, one answer is to provide for them, not remove them.

David feels income inequality is the root cause of poverty.. “It all comes down to not having enough money to get to the end of the month,” he says. “If you’re working for a living, you need a living wage, and currently that means at least $20 an hour in Grey Bruce.”

The Grey Bruce Labour Council’s recognition of David McLaren as their Activist of the Year is an honour to be celebrated. We recognize the good work the Council has done on matters of precarious work and poverty, their part in building a more caring community in the Grey Bruce area.