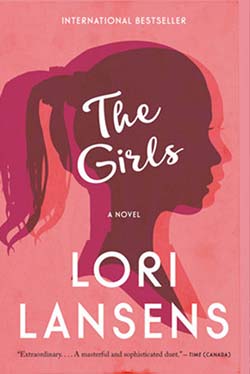 Rose and Ruby Darlen are closer than most twin sisters. Indeed, they have spent their twenty-nine years on earth joined at the head. Given that they share a web of essential veins, there is no possibility that they can be separated in their lifetime.

They are two of the most extraordinary and unforgettable characters to spring into our literature. As Kirkus Reviews puts it, “The novel's power lies in the wonderful narrative voices of Rose and Ruby. Lansens has created a richly nuanced, totally believable sibling relationship... An unsentimental, heartwarming page-turner.” The National Post writes: “Lansens’s beautiful writing is so detailed that it is often easy to forget that the material is not based on a true story. She captures what it would be like never to sleep, bathe, go for a walk, or meet friends on your own.”

Lori Lansens was a successful screenwriter before she burst onto the literary scene in 2002 with her first novel, Rush Home Road. Translated into 12 languages and published in 15 countries, Rush Home Road received rave reviews around the world. Her follow-up novel, The Girls was an international success as well. Rights were sold in 20 territories and it was featured as a book-club pick by Richard & Judy in the UK, selling 300,000 copies. Her most recent book is The Wife's Tale, which was a national bestseller. Born and raised in Chatham, Ontario, Lori Lansens now makes her home in the Santa Monica Mountains with her husband and 2 children.

Julia White will read The Girls by by Lori Lansens. Julia is a Co-operators Financial Advisor and owner of Julia White & Associates in Meaford. Julia will read the life story of a pair of conjoined twins as told by the twins themselves — Lansens' acclaimed take on this curious subject matter. Julia will represent Meaford.

BY JULIA WHITE FOR SOUTHGREY.CA — “I have never looked into my sister's eyes. I have never bathed alone. I have never stood in the grass at night and raised my arms to a beguiling moon. I've never used an airplane bathroom. Or worn a hat. Or been kissed like that. I've never driven a car. Or slept through the night. Never a private talk. Or solo walk. I've never climbed a tree. Or faded into a crowd. So many things I've never done, but oh, how I've been loved. And, if such things were to be, I'd live a thousand lives as me, to be loved so exponentially.”

From the first paragraph of the novel, I was so profoundly moved to get to know these girls, now women, I couldn’t put the book down. I had to keep reminding myself that this was not a true biography but one of fiction.

This book broke my heart but made it sing, I felt profound loss, but also love that has no bounds.

I'll be honest, my report was late because I read the book twice and still, I don’t feel that my report has done Rose and Ruby justice.

I will let you decide.

Lansens brings a tone of absolute authority to The Girls. The amount of research the author had to do to accomplish this must have been formidable. It's easy to forget that this is a work of fiction. There is such a strong sense of time and place, unfolding as we read the manuscript written by Rose, with the odd chapter by the less literary but more talented and heartfelt Ruby.

Rose has decided to write this autobiography because of her passion for writing. Encouraged by her aunt who buys her a computer, she throws herself wholeheartedly into documenting what being inseparable has meant to her. Rose and Ruby were lucky in their upbringing. While not well off, the Darlens are a loving couple who devote their lives to their instant family, teaching the girls how live separate lives even while being conjoined. Rose is the intellectual, performing well in school, enjoying sports, and dreaming of being a writer. Ruby has a keen interest in First Nation artifacts and has found many on the farm property, donating them to the local museum. She also enjoys television and believes in ghosts and reincarnation, but she's not a scholar.

By choosing to tell the story of these endearing twins through a work in progress written by both, the author reveals herself as a master of her craft. It's an inspired decision, allowing the story to be succinctly shown, as opposed to merely being told. By allowing both sisters to have a voice, she makes good use of dramatic irony. We read what Rose believes to be true of her sister, this soul to whom she is permanently attached, and then we are allowed to discover how wrong she is. Reading Rose's words, experiencing her struggles with literary worth and smiling at her occasionally naive but endearing posturing, we share her world in a way we otherwise never could. Not surprisingly, it is Ruby's final words to the reader that will stay with us most. "I'll miss you, and I'm not just saying that."

Stay tuned for the next instalment...

Rose and Ruby Darlen are craniopagus twins born joined at the head in 1974. Their young, unmarried mother abandoned them as quickly as possible, but the nurse, Aunt Lovey was in attendance at their birth and stepped in quickly to adopt the conjoined twins. In her 50s, childless and married to a Stan, a Slovakian immigrant, they quickly undertook the challenge.

When the book begins, "the girls" are 29 and the oldest surviving craniopagus twins in the world. They come into the world on a night of chaos, a rare tornado rips through a small Ontario town about 4 hours southwest of Toronto. At its end they have entered but are unlikely to leave, their 30th year. Ruby is suffering more and more health problems. She's unsteady on her feet, suffers horrific headaches and is slowly going blind due to an aneurysm which is threatening to take the lives of both sisters at any time. She has always been the strong one that took care of them both, so she doesn’t know how to let go.
Ruby and Rose draw on a common blood supply: over a hundred veins as well as their skull bones are shared, making it impossible to separate them. In order to survive they must work as a team. If one dies, the other goes too.

Raise your right hand. Press the base of your palm to the lobe of your right ear. Cover your ear and fan out your fingers -- that's where my sister and I are affixed, our faces not quite side by side, our skulls fused together in a circular pattern running up the temple and curving around the frontal lobe. If you glance at us, you might think we're two women embracing ....

.... I have carried my sister like an infant, since I was a baby myself. Ruby's tiny thighs astride my hip, my arm supporting her posterior, her arm forever around my neck.

Ruby and Rose grew up in a rural Ontario farming community, a small town called Leaford where they are known to most people simply as "the girls." Here they've gone to school, held part time jobs at the local library, pursued their interests and built relationships. They've suffered the loss of both of their beloved parents and learned to live on their own, and they've moved from the country to the town. Been normal, in other words.

The girls' lives, though shorter than most, are filled with their own share of love and grief and confusion. There are a few significant events in their lives, which take up much of the book. Early on, the girls are troubled by the grief of their next-door neighbors, whose young son died in the tornado that arrived on the day the girls were born. The girls' own lives are put at risk when a classmate of theirs tries to play a prank on them on their eighth birthday – as a result, the girls almost drown.

The girls also experience love — they share a crush on a boy named Frankie Foyle, who eventually becomes their shared romantic partner. Foyle gives Ruby her first kiss, and simultaneously takes Rose's virginity. As a result, one of the twin's becomes pregnant, and the two suffer after the baby is lost due to health complications caused, in part, by their shared circulatory system.

Rose is the more academically and athletically inclined of the twins — she enjoys writing, and it is her idea to begin writing an autobiography when she is diagnosed with a brain aneurysm. The twins were in many ways expecting this eventual diagnosis; their fused veins and vessels caused complications not found in other people, and doctors suspected that an aneurysm would cause the eventual end of their lives.
Rose is the intellectual, performing well in school, enjoying sports, and dreaming of being a writer. As she tells her story you feel as though she is trying to follow a set of rules that a writer would follow – the plot, characters, something to hook the reader. For being attached to her sister for her entire life I am still surprised how the author make the girls to be so different in their thoughts, mannerisms, attitudes toward each other but the common thread is always and will always be love.

Ruby, the more beautiful of the two sisters, but is also more sickly throughout her life. She might also be more relatable when you start to read her contributions. As she said, she is not a writer, but she does write from her heart, holds nothing back and actually might end up giving up a more honest and authentic autobiography of their lives than Rose does. When Rose receives her diagnosis, Ruby knows that she will die with her sister.

As much as they are twins, they are their own person. Ruby has a keen interest in First Nation artifacts and has found many on the farm property, donating them to the local museum. She also enjoys television and believes in ghosts and reincarnation, but she's not a scholar.

The lives of Uncle Stash and Lovey are also explored, including Uncle Stash's journey back to Slovakia to scatter the ashes of his deceased mother. We only learn about the lives of the two characters through the girls, but you see the strength, compassion, and commitment they have to raise these girls as ‘normal’ together. Throughout the book both Lovey and Stash allow the girls to be independent, so much so you forget at times that they are one. Their ability to protect the girls but allow them to be themselves in a time where they could have been put in a home, or worse exploited shows their true character.

Without spilling too much both Lovey and Stan come to a point where they could have broken in two with what happens to Rose but instead they take a high road that shows us again that love has no bounds.

Although this book was written in 2005, I believe it to be timeless. It is a book about empathy, compassion, forgiveness, and growth. We can be an individual while relying on others. We can love fully and completely while being limited in other ways. As we can be ordinary while leading extraordinary lives.

It is a story that I didn’t want to end. As I got closer to the final page, I honestly read less, put the book down more and hoped to not reach the final chapter. But the girls took us on an incredible journey of their short but full lives and I am proud to say, they taught me something. My only sadness is that I wasn’t there to say goodbye to The Girls.

Vote now for The Girls and the community of Meaford