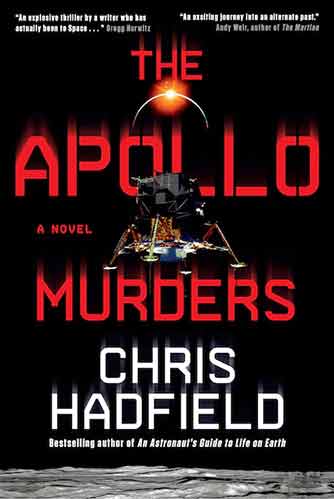 As Russian and American crews sprint for a secret bounty hidden away the lunar surface, old rivalries blossom and the political stakes are stretched to breaking point back on Earth. Houston flight controller Kazimieras "Kaz" Zemeckis must do all he can to keep the NASA crew together, while staying one step ahead of his Soviet rivals. But not everyone on board Apollo 18 is quite who they appear to be.

Colonel Chris Hadfield is the author of three international bestsellers: An Astronaut’s Guide to Life on Earth, You Are Here and The Darkest Dark, plus the new thriller novel, The Apollo Murders. The Apollo Murders is full of high tech adventure, danger and people pushed to their limit, at a pivotal moment in history.

But if you didn't know this before now, Chris Hadfield also happens to be a Canadian icon. A heavily decorated astronaut, engineer, and pilot, Colonel Hadfield’s many awards include the Order of Canada, the Meritorious Service Cross and the NASA Exceptional Service Medal. He was named the Top Test Pilot in both the US Air Force and the US Navy and was inducted into Canada’s Aviation Hall of Fame. He has flown three space missions, building two space stations, performing two spacewalks (EVAs), crewing the Shuttle and Soyuz and commanding the International Space Station. Oh, yes, and occasionally, he's been known to dabble in some music and play a tune for his friends and family.

Kimm Culkin will read The Apollo Murders by Chris Hadfield. Another experienced library employee, Kimm works at the West Grey Public Library but also has a lengthy history with the Youth Literacy Council South Grey Bruce. She will represent West Grey.

BY KIMM CULKIN FOR SOUTHGREY.CA — If you’re looking for a well-muscled techno-thriller reminiscent of the genre in the 70s, a wild ride back into the heady days of the Space Race and the Cold War, The Apollo Murders by Canadian astronaut Chris Hadfield is the book for you.

The real Apollo 18 mission was a casualty of budget cuts and Apollo 13 fallout. In The Apollo Murders it is a mission that’s caught in the grip of powerful forces: the space programs of Soviet Russia and the US, and the political backrooms, spy networks and security manoeuvres of the Cold War in 1973. Hadfield’s love of science and technology informs the entire story, so explanations of jargon, protocols and machinery surface regularly, occasionally at the expense of the pace. But his experience as a seasoned spaceflight veteran and commander means that we, as readers, get a roadmap to the labyrinthine movements within the space program of the day and of international relations of the era.

The space program of this thriller is relatively enlightened, with a black astronaut (the first in real life heading into space in 1983), and a female Soviet cosmonaut (Valentina Tereshkova was the first IRL, soloing in space in 1963), but it is still most definitely white-man-heavy, lending authenticity to the story.

The terrain of any thriller is rich with spoilers, but in general The Apollo Murders tells a ‘what-if’ story of a lunar landing mission that is highjacked, bit by bit, to become, first, an investigation into why the Soviet announcements regarding its space program aren’t matching their actions monitored by the Americans, to the detection of a Soviet space station designed exclusively for spying (similar to the American MOL), to the unearthing of hidden agendas and connections, through a showdown in space and the inevitable consequences. Clumsy sabotage, unlikely collaborations, treachery, betrayal and political implications result, with some heart-thumping discoveries along the way. You know the kind where you find yourself breathing, “Noooo…”? Like that.

The action begins very slowly, with much deliberation, jargon-spewing and scene-setting, so when the action ratchets up, we have context, a lexicon and several discrete perspectives, strands of the story that will be woven together in the telling. In the process, we spend time with characters in Houston, East Berlin, Soviet Ukraine, Washington, and Baikonur, and, of course, space – and our Moon. Time dances around from the mid-1950s to the early 1970s, and some of the characters, like Alan (“Al”) Shepard and Gene Kranz, are familiar historical figures from the American space program, given life as key decision-makers here as each new event and discovery leads to more on-the-fly decisions and tighter deadlines.

At the story’s heart is Kaz Zemeckis, a stoic former Navy test pilot and astronaut selectee until an accident in flight moves him to the position of flight controller and “crew-government liaison” among the military, politicos and NASA. He is in a great position for insider conversations among NASA personnel, Washington diplomats and politicians, and the astronauts themselves.

The Apollo 18 mission crew changes several times from its formation to its landing back on Earth, but the central figures are the stock characters you’d expect from a thriller, so pick your favourites: the steady, solid as a rock, straight shooter; the cocky, ambitious flyboy with a chip on his shoulder and a secret; the skilled, affable and trustworthy perfect team member. Then, on the other side: the fiery, brutish and unreasonable Soviet military figure; the innocent dupe of the foreign power; the methodical spy master. And then the tertiary figures: the brilliant girlfriend, consigned to an outer ring of the operations; a female technician who inadvertently contributes to the crisis. Principals, feisty secondary characters and bland yeoman, straight out of the original Star Trek.

The inclusion of recognizable public figures from the time, including Nixon and Haldeman, will give older readers a feeling of tilting slightly on their axis, as if they missed out on a big news event — or was it another cover-up? — in an era of Viet Nam, Watergate and the fallout from the Kennedy assassination.

The astronauts would be the central figures in most reportage of any space mission, but here they seem almost helpless, following instructions from a variety of sources without complete understanding.

One generally doesn’t think of themes when discussing these beefy, classic-style thrillers. What, “staying alive,” maybe? However, something Chris Hadfield excels in, is offering a high-level view of life and living, juxtaposing the hellish and the sublime.

The opening of Chapter 11, for example, gives the reader a respite from human shenanigans to describe “an ancient star” in the “time of primordial hell”... “burning hotter and hotter as it ran out of fuel, suddenly explod[ing] in a blinding, cataclysmic supernova.” For about a page and a half, he summarizes the formation of the Moon in a truly cosmic zoom out over billions of years, a mind-boggling perspective on the process of forming a celestial body. And then — we suddenly zoom in to a bit player leaning in to examine a detail on a camera image. It is dizzying.

And Hadfield cannot seem to help himself as he contributes to the boys’ club camaraderie of the astronauts of this era. The irony is the friction, suspicion, secrecy and treachery among them, belying the maudlin toasts and manly grief early in the novel.

On the surface, a novel which, in large part, takes place in a cramped and claustrophobic environment has some obvious parallels to pandemic life. On a larger scale, though, this novel reminds us of the antagonism of the Cold War, and the ramifications and dangers of taking entrenched, hostile and suspicious positions – in the story among nations, but in our current social and political climate, between small ‘c’, small ‘l’ conservative and liberal thinkers, between vaxxers and anti-vaxxers and between those who are clearly out for themselves and those who consider the greater good. It is sobering to consider how recently the Cold War affected many aspects of everyday life, and how easily authoritarian governance can take hold, with those affected helplessly improvising solutions to preventable problems.

The reliance on technology, particularly video and communications, should also give readers pause. The story as interpreted when missing one of these elements, such as the action around one of the lunar landings when one party can’t receive vocal transmissions, and one has no video feed, tells us both about our reliance on tech when we are in remote circumstances, and how our information can be distorted when our access to the ‘full picture’ is incomplete.

Chris Hadfield’s The Apollo Murders is going to make techno-geeks delirious: it is easy to picture ongoing online tweezing exchanges between Apollo nerds, dissecting and interpreting the tech and scientific aspects. As has been said elsewhere, the amount and relevance of some of the technical information can be overwhelming for the reader who just wants a great ride. While there is a nod in the direction of romance, the mission and the machinations are most definitely centre stage.

The novel’s structure is truly reminiscent of an earlier era of thriller, and those who remember, even faintly, the glamour around the Apollo program and the darker aura around the Cold War will definitely feel the pull of the familiar thrills — and anxiety. Sort of like remembering how you felt when you had your tonsils out: not necessarily something you want to repeat, but an important event in your life that’s hard to forget — and there was ice cream.

Not to equate The Apollo Murders with a tonsillectomy; just a sense that this alternate history may leave some readers relieved that both the Apollo program and the Cold War ended, leaving us with endless avenues of speculation, one of which has been intriguingly explored by our own Canadian astronaut.